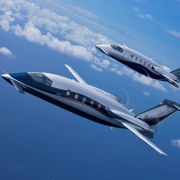 Each June, Robb Report, a leading US journal on luxury brands, publishes this special issue, which represents the culmination of an entire year's search for excellence in every aspect of the affluent lifestyle. Now in its 22nd year of awarding this honor to products that represent the pinnacle of luxury, style and design, the Editors of Robb Report chose this modern aircraft as Best Business Turboprop for its operating efficiency and its modern, stylish, functional design.

The Piaggio P.180 Avanti II can carry eight passengers and is certified for single-pilot operation, which contributes to its low operating cost. The elegant Avanti II also has many practical features required by today’s business travelers including a full stand up cabin (the only aircraft in its class to have this) as well as rear facing twin turboprop engines that direct engine noise away from the cabin making for a serenely quiet and comfortable environment.

The Avanti II, while offering its occupants jet equivalent speeds, is the most environmentally friendly airplane in business aviation today. It uses up to 40% less fuel than similarly sized jets, which in turn also translates into much lower overall operating costs than any other similar sized aircraft.