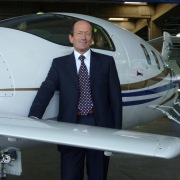 Piaggio Aero Industries announced today that its Board of Directors, under the direction of its Chairman Mr.Piero Ferrari, has appointed Mr. Eligio Trombetta as General Manager of Piaggio Aero.

With this key appointment, as part of its consolidation and expansion programme, Piaggio Aero has strengthened its senior management team, and its abilities to develop the company’s industrial growth, with the full backing of the majority shareholders and  strategic partners, Mubadala Development and Tata Limited .

Alberto Galassi, CEO of Piaggio Aero Industries said: “Eligio Trombetta is highly regarded in the aviation industry and brings his proven strengths to this new role in Piaggio Aero. We have a unique product requiring unique innovations, and our company will benefit from Eligio’s experience in management and his strong technical skills.”  “I would take this opportunity also to thank Ugo Anatra for the excellent job he did for Piaggio Aero over the past years and we will continue to benefit from his experience in the future as he has agreed to continue to collaborate with the company and its shareholders” he added.

“I’m very pleased to take on this new role in a company that includes some of the most important industrial and financial groups of the world as shareholders, and thank Mr Piero Ferrari and Mr Alberto Galassi together with Piaggio Aero’s Board of Directors, for the trust and responsibility they have put in me" stated Mr Trombetta . “With the continued support and contribution of our shareholders, our workers and all of Piaggio Aero’s partners we can confidently seek out new opportunities to grow the company further”.

Piaggio Aero’s new General Manager, already has considerable professional and managerial experience in the aviation Industry as he joins Piaggio from Alenia Aermacchi where he was Deputy General Manager.

After graduating in Aeronautical Engineering at Milan Polytechnic Mr Trombetta began his career in Alenia Aermacchi in 1979 becoming Head of the flight test dept in 1987.

1991-Named as Project Manager, of JPATS (Joint Primary Aircraft Training System) and was responsible for the technical /operational aspects of the program;

1997 -Appointed Head of Procurement for the management of all sourcing activities for material, equipment, subcontracting, services and offset initiatives implementation re-engineering of the department, with implementation of cost-reduction and continuous improvement initiatives.

Mr. Trombetta is member of the Society of Flight Test Engineers and he is a Royal Aeronautical Society, Fellow. He is also a Senior Member of the American Institute of Aeronautics and Astronautics