Milan, Italy March 28, 2011
The P.180 Avanti II aircraft turned into a work of art by Mimmo Paladino, displayed at Galleria in Milan 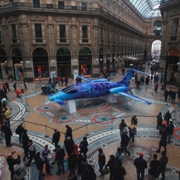 This is the first time in the world an aircraft has been painted by a contemporary artist and the Master Paladino was inspired to create this work of art from the Piaggio P.180 Avanti II because of its unique, unmistakable design.

The P.180 Avanti II “Cacciatore di Stelle ” (Star Hunter) will be displayed in the breathtaking location of Galleria Vittorio Emanuele II in Milan from March 28th to April 28th 2011.
The metamorphosis of the P.180 Avanti into” Cacciatore di Stelle” recalls both the past and the future, through its decoration with ancestral symbols and possible new ways of communicating:  constellations of signs enclosed by geometrical spaces to create a celestial map.

This extraordinary artwork  in the heart of downtown Milan, will be positioned on a white base which, according to the artist, is linked to the “Montagna di Sale” (Salt Mountain) and the Duomo di Milano.

The whole exposition dedicated to Paladino will take place along a 500 meters path, that makes it the longest display dedicated to a contemporary artist.

The “Cacciatore di Stelle” is part of  the anthological and personal exhibition of the artist Mimmo Paladino hosted by the Palazzo Reale (including more than 50 artworks from the 70’s to the present day), which will be enhanced by the renowned “Montagna di Sale”  ( 37 meters) that will be placed in the Piazza Reale.

According to Mimmo Paladino “Art is not an end in itself, and it doesn’t mean yielding to poetic attitudes: Art always implies investigating language”.

“We are very proud that Master Mimmo Paladino has now been inspired by a Piaggio Aero P.180 aircraft and that he would turn it into a unique work of art.”Alberto Galassi, CEO of Piaggio Aero Industries said: “The P.180 Avanti has been chosen because it can be considered a work of art itself, as an expression of Italian genius in design and engineering, that’s why this creation  is an unprecedented event.”

The “Cacciatore di Stelle”, the Palazzo Reale exhibition and the “Montagna di Sale” were made possible by the appreciation for art and culture by Piaggio Aero, Banca Popolare dell’Emilia Romagna and Meliorbanca.