Geneva May 16, 2011
Alkanair appointed as Piaggio Aero dealer for Egypt 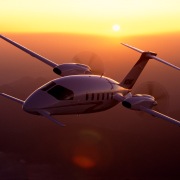 Alkan Air, the Cairo based charter operator and service centre, has been appointed as the official Egyptian agent for the sale of Piaggio Aero P.180 Avanti II aircraft.

Alkan Air will focus on the promotion and sale of the Piaggio Aero P.180 AVANTI II aircraft throughout Egypt. The company also plans to add a P 180 AVANTI II to its own fleet of aircraft in the near future.
The P180 Avanti II brings a completely new aircraft to Egypt – one that uses 40 percent less fuel and has the lowest carbon footprint in its class by far, while providing class leading performance and cabin comfort. The P180 Avanti II is uniquely styled and efficient, making it an ideal aircraft for the North African medium range travellers.

Awad Dargham, General Manager of Alkan Air said “I am pleased to announce this agreement between ourselves and Piaggio Aero. We have always been aware of the AVANTI II's suitability for our market and I am delighted that we now have the opportunity to not only operate the aircraft but, also to help other operators in the region to discover the many benefits of this excellent aircraft. As we continue to grow and stay at the forefront of aviation in our region I look forward to operating the aircraft as part of our fleet. I anticipate a long and successful partnership with Piaggio Aero.”

Speaking on behalf of Piaggio Aero, Deputy General Manager and Chief Commercial Officer Giuliano Felten said: “Piaggio Aero welcomes Alkan Air to its growing international sales network.
We have chosen this company because it is the leader in air services in Egypt and we appreciate the way they manage this business in their country. Thanks to the Alkan Air’s knowledge and experience in the Egyptian market, Piaggio Aero will be able to effectively approach this emerging North African market and learn more about the opportunities and benefits to grow its business there”.

The Piaggio Aero P180 Avanti II is extremely robust and is the world’s fastest turboprop aircraft, offering outstanding performance and a comprehensive specification that meets the demands of the Egyptian market. With a maximum speed of 402kts /745kph and a range of about 1500 nautical miles, the aircraft is well suited for both long and short distance trips and runways.

Its full stand up cabin, the biggest in its class of mid-size jets and twin turboprops by far, provides an airy, comfortable and serene flight environment for its passengers aided by, its low cabin noise and sea level pressurization up to 24,000 feet. Besides its own impressive capabilities, the Piaggio Aero P180 Avanti II is also the only aircraft to proudly display the legendary "prancing horse" livery, as it is the chosen business aircraft of the Scuderia Ferrari, the Ferrari Racing Team.