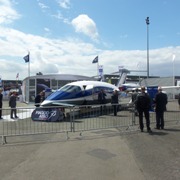 Piaggio Aero took part in the 49th Paris International Air Show at Le Bourget (from 20 to 26 of June), the largest global showcase for aerospace technology, defence and security industry, and the event that most represents current trends in the international market.

Many visitors were attracted by the unique design of the Italian aircraft and visited Piaggio Aero chalet , which covered a large exhibition area and was positioned next other major OEMs.