São Paulo August 12, 2011
Felipe Massa Guest of Honour at the launch event of the P.180 Avanti II in Brazil 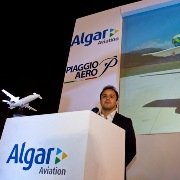 Piaggio Aero celebrated the launch of the P.180 Avanti II in the Brazilian Market during a lifestyle event at Congonhas airport in Sao Paolo. Guest of Honour has been Felipe Massa, the Scuderia Ferrari’s Formula one pilot.

With a unique, contemporary and bold design, the Piaggio Aero P180 Avanti II is the fastest and most advanced twin-engine turboprop in the world ideally made for the Brazilian market and for all medium range Latin American destination.
The aircraft, which can carry up to nine passengers, is capable of flying at a maximum speed of 402 kts, 745 km/h. It has a range of more than 2,700 kilometers and can fly up to a flight ceiling of 41,000 feet. The full stand up cabin is the most spacious, comfortable and quiet in its class.