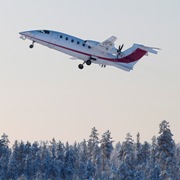 Piaggio Aero will exhibit its core product P.180 Avanti II, which has recently achieved both type and production certificates, from the Russian aviation authority, the Interstate Aviation Committee (IAC).

The IAC type-certificate confirms that the design of the aircraft complies with Russian regulations, having previously gained both EASA/FAA certification in 2005. The Avanti II can be legally registered and operated throughout the Russian Federation.

Taking part in this event is an excellent opportunity for Piaggio Aero, since business aviation is one of the most rapidly developing and perspective branches of the Russian market. Besides, Jet Expo is the first and only industry show in Russia.

All the information about the International Business Aviation Exhibition Jet Expo 2011 is now available on: