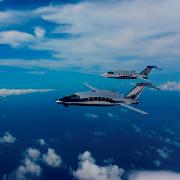 Piaggio Aero has announced at NBAA 2011 that its P.180 Avanti and Avanti II aircraft have received their type certificate from the China Civil Aviation Authority, CAAC.

The CAAC type-certificate confirms that the design of the aircraft complies with Chinese regulations, having previously gained both EASA/FAA certifications. The P.180 Avanti / II can now be legally registered and operated throughout the People's Republic of China and Hong Kong.

The Chinese certification process started in 2010 with a cooperation team consisting of experts from the Certifying Authority CAAC, and the engineering and certification teams of Piaggio Aero.
The validation of Type Certificate No. VTC0261A by General Administration of Civil Aviation of China (CAAC) was awarded to Piaggio Aero on October 9, 2011, during NBAA convention .

Design recognition of the Piaggio Aero P.180 Avanti / II in meeting the CAAC airworthiness standard, enables P.180 owners to register their Piaggio Aero aircraft on the Chinese registrations. The use of Chinese grade fuel was also approved.

"We are really happy to have achieved Chinese certification for the P.180 Avanti II, this now opens the way for the Avanti II for one of the most promising market of the world ," said Piero Ferrari, Piaggio Aero Chairman.
"Piaggio Aero is fully committed to making quality products available around the world and both China mainland and Hong Kong represent a high potential markets for the P.180 Avanti II in both its executive and also special mission versions. " Mr Ferrari added “ The P.180 Avanti II by virtue of its low operating costs, gives us a unique advantage in the market and allows us to offer Chinese customers economics, performances and operation that were not previously available. We are proud to become part of this growing economy” concluded Piaggio Aero Chairman.

The Piaggio Aero P180 Avanti II is the world’s fastest turboprop aircraft with an outstanding performance and specification for the Chinese market. With a maximum speed of 402kts /745kph and a range of just under 1500 nautical miles ,its full stand up cabin, the biggest in its class of mid-size jets and twin turboprops by far, provides an airy, comfortable flight for its passengers aided by its low cabin noise and sea level pressurization.

Besides its own impressive capabilities, the Piaggio P180 Avanti II is also the only aircraft to proudly display the legendary "prancing horse" livery of the Scuderia Ferrari, the Ferrari Racing Team, as it is their chosen business aircraft due to its performance, state of the art technology and unrivalled style.

“Piaggio Aero has developed a strong working relationship with the CAAC and we are satisfied to have achieved the Chinese certification on schedule. After Brazilian and Russian certification obtained last year and the Indian certification gained 2 years ago, receiving the type certificate validation for China allows Piaggio Aero to continue our international expansion into the BRIC Countries .
We are really proud to be able to offer such a well suited aircraft to China.” Commented Eligio Trombetta, Piaggio Aero General Manager.

Versatility and reliability, combined with advanced technology have also made the Piaggio Aero P.180 Avanti II the ideal aircraft for sensitive, crucial missions such as Flight Inspections and Air ambulance.

In its “Special Mission” configuration, the P.180 Avanti II is used as a multi-utility aircraft for patrolling, photo detection, and civil and military flight inspection.