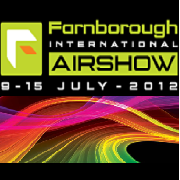 It is the second-largest air show in the world. Major aviation parts and aircraft manufacturers and suppliers will be in attendance.

Piaggio Aero will participate to promote the180 Avanti II aircraft in both its executive and special mission versions, which include Aero Ambualance, Flight Inspection and Calibration and the Light Maritime Patrol.


FIA holds a prominent position within the aerospace calendar taking place on a biennal basis (once every two years) over one week in July.

The 2012 event will feature 165 aircraft in static display and spectacular flying displays.

In addition, Piaggio Aero will exhibit its P.180 Avanti II in the Business Aviation Park of the Show, in collaboration with Corporate Jet Management, P.180 sales agent for the United Kingdom, Ireland, Channel Islands and Isle of Man.