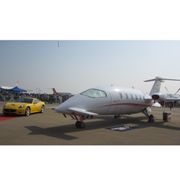 The brand new Piaggio Aero P.180 Avanti II will be operated in China by Free Sky Aviation under the CAAC certification that was obtained by Piaggio Aero in October 2011.

The delivery of the first P.180 Avanti II represents a milestone for Piaggio Aero and a significant step forward for its business expansion program in China. The delivery of a second aircraft will follow shortly as the second P.180 Avanti II will land at Beijing Free Sky Aviation’s Headquarters during December.

Free Sky Aviation will begin their operation offering exclusive private aircraft club program for their P.180 Avanti II fleet, which will introduce a new standard of air travel for Chinese business aviation users. The Piaggio Aero P180 Avanti II is in fact, the world’s fastest turboprop aircraft with an outstanding performance and level of comfort, with a maximum speed of 402kts /745kph and a range of nearly 1500 nautical miles. With its full stand up cabin - the biggest in its class of mid-size jets and twin turboprops by far - the P.180 Avanti II provides an airy, comfortable flight for its passengers aided by its low cabin noise and sea level pressurization.

China has a huge potential for aviation and its fast expanding business aviation market is expected to grow and open rapidly in the coming years with the Chinese Government moving to tap its enormous potential and the benefits it offers to Chinese companies and individuals alike. In this expanding economy, Piaggio Aero will now grow in China as a result of their strong partnership with CAEA Aviation Investment Co. Ltd, the exclusive dealer for its P.180 Avanti II aircraft in mainland China.
CAEA is developing the Chinese market for Piaggio Aero through its focused, management experience, mature sales channels and strong market promotion. In delivering the first aircraft to China, CAEA Aviation and Piaggio Aero will grow their mutual business to a new level and expand its long term potential for sales of Piaggio Aero P.180 Avanti II aircraft

The P.180 Avanti II’s high performance and superior comfort are tailored to meet the needs of the most selective business elite who will also love the P.180’s unique Italian elegance.

It’s not by chance that Piaggio Aero aircraft has also been chosen by the Scuderia Ferrari, the Ferrari racing team for their aviation needs, and it’s the only aircraft in world displaying their legendary Prancing Horse symbol” he added. “Piaggio Aero commits itself to provide the most excellent products for the global multipurpose aircraft market and we are proud to see the first Chinese registered aircraft flying in the sky over China thanks to CAEA and Free Sky Aviation. We trust our P.180 Avanti II aircraft will be a business booster for our partners and for the overall growth of Piaggio Aero in China” he concluded.