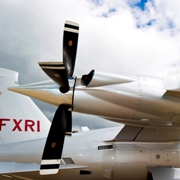 In its ongoing quest to make the already fuel efficient aircraft , even more cost effective to operate , Piaggio Aero announced today that it is has now approved a revised maintenance program with extended inspection intervals for its fuel efficient twin turboprop.

In 2012 the Italian manufacturer reduced the tasks covered by its “A” check service, making it a "light inspection and servicing" operation, while at the same time extending the compliance interval from 150 to 200 flight hours.
This change, together with the cancellation of the previously required daily check and monthly inspection, represented a reduction of up to 18% in the maintenance man-hours for the aircraft.

Piaggio Aero now announces that the C and D checks, due respectively at 1500 and 3000 flight hours, have been extended to 1800 and 3600 flight hours respectively. These newly approved intervals allow the operator to match the airframe inspection schedule with that of the Pratt & Whitney Canada PT6-66A engines on the aircraft.

“The approval of the new maintenance program has been enabled following an extensive study of reliability data gathered over 800 thousand flight hours, accumulated by the worldwide fleet of Piaggio P 180 Avanti aircraft in a variety of mission profiles” said Paolo Ferreri ,VP of Worldwide Customer Support for Piaggio Aero. “We are consistently seeking ways to provide savings for our aircraft operators around the world and are confident these extended maintenance times will do just that” he added.