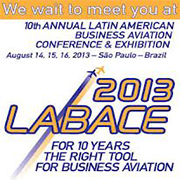 Piaggio Aero will attend the 10th Annual Latin American Business Aviation Conference and Exhibition (LABACE 2013), that will be held from August 14 to 16 at São Paulo Congonhas Airport, Brazil.

This year the exhibition area will see high levels of attendance – with a record of more than 16,000 visitors from around the world attending over the three days.
The aircraft static display will include more than 70 airplanes.

Piaggio Aero’s participation in the major business aviation event for Latin America is part of the company’s strategic plan to expand into Central and South America: last year, Latin America’s aviation industry outperformed all other regions in terms of traffic growth and load factor.

The Piaggio Aero P180 Avanti II is the world’s fastest turboprop aircraft with an outstanding performance and specification for the Brazilian market: visit Piaggio Aero booth at LABACE and discover the extraordinary P.180 Avanti II.
For further information on this event, see the official Website http://www.abag.org.br/labace2013/