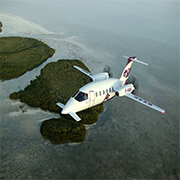 Piaggio Aero together with CAEA (Beijing) Aviation Investment Co., the exclusive P.180 Avanti II distributor for Mainland China, signed a contract at the NBAA 2013 for the sale of two P.180 Avanti II aircraft plus 8 options with SR Jet, part of the Beijing based Sparkle Roll Investment Holdings Limited.

The aircraft are Piaggio Aero P.180 Avanti II models customized with extended range mission capabilities. Thanks to the installation of a permanent additional tank , which replaces only half of a closet in the toilet and with no changes to the airframe, the fuel capacity of the Piaggio Aero iconic aircraft grows from 2,826 lb to 3,226 lb . This allows the fastest business turboprop in world to increase its maximum range to 1,720 Nm (IFR – FAA reserves, 4 Passengers), enabling a comfortable nonstop flight from Beijing to Hainan or Hanoi or, from Las Vegas to Jacksonville, Charlotte, Cancun or Toronto .

The extended range P.180 Avanti IIs will be delivered in Beijing starting from March 2014 and will be operated in China following Piaggio Aero’s CAAC Certification that was obtained in 2011.

Sparkle Roll Holdings Limited as a globally renowned and industry-leading enterprise in luxury brand management and the entertainment industry, is dedicated in the active development and innovation of China’s commuter aviation industry. SR Air’s focus is to provide a brand-new mode of high efficiency environmentally friendly, superior comfort travel for domestic regions, as a premium quality business commuter flight service, and to be a transitional provider between civil and business aviation. In the near future, SR Air also plans to rapidly create a number of operation bases (FBO’s), aircraft maintenance centers (MRO’s ).

We are very proud of this new extended range variant of our aircraft, which provides maximum flexibility for the Avanti II operators, who are now able to fly longer missions with an unbeatable level of comfort and speed. We believe that the unmatched performance and unique appeal of our aircraft will become more and more recognized, especially in China, which offers a huge potential for business aviation. We are pleased to welcome SR Jet as the newest P.180 Avanti II operator, integrating our aircraft with the portfolio of luxury brands that the SR Group successfully manages”.

Mr. Xingzhuo Ji, President and Executive Director of SR Air said, “The Piaggio P180 is absolutely a unique twin-Engine turboprop aircraft, with the core advantages of unmatched performance, unbeatable comfort and cost efficiency that is integral to SR Air development of China’s business aviation market. This aircraft will be undoubtedly the first choice by global business aviation operators.

This unique aircraft differs from traditional turboprop aircraft, as this is the exclusive aircraft which has the cruising altitude, speed, climb performance and cabin comfort of a jet aircraft, but costs the price and has the operating cost of a typical turboprop. SR Air’s selection of the newly developed P180 "Long Range" aircraft by Piaggio Aero as our core aircraft model, will further increase SR Air's market competiveness.

China is a super economy with vast geographic territory, a large population and rapid economic growth. In recent years this economic growth and strengthening regional economic restructuring, coupled with the promotion of economic exchanges and collaboration among regions, have been the way for China’s government at all levels and the aviation authorities to promote social development
. As an ambitious private enterprise, SR Air is visionary in its focus on actively developing and creating the premium brand within Chinese business/corporate aviation and will be taking great steps with its ambitious plans to develop China’s business and commuter aviation market.