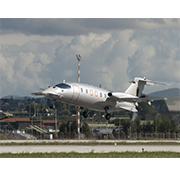 Piaggio Aero, together with Selex ES, announces at the Dubai Air Show 2013 that the P.1HH HammerHead Unmanned Aerial System (UAS) has achieved the demonstration and validation phase of the programme with the maiden flight of the P.1HH DEMO, Piaggio Aero’s UAV technology demonstrator. This flight is a fundamental milestone that paves the way to the next phase of the programme development

The flight readiness of the P.1HH DEMO flight Technology Demonstrator had been confirmed by the first flight, which occurred on Thursday 14th November 2013, at the Trapani (Italy) “Birgi” Italian Air Force base.
The P.1HH DEMO UAV has taken off at a rotation speed of 110 kts and performed a flight over the Mediterranean sea for approximately 12 minutes, while being remotely piloted from the Ground Control Station, which allowed for testing of the navigation system and verification of maneuvering capabilities in both manual and automatic flight modes.
The flight was performed in mid-flap configuration with landing gear extended. The aircraft reached an altitude of 2,000 ft. and a speed of 170 Kts, flying at 12 miles from the base. The UAS landed at 1.15 pm at the Trapani military airport completing its first flight test.


“The first flight achievement demonstrates the huge progress made by Piaggio Aero, together with Selex ES and the support of the Italian Air Force, in the development of this new generation of Unmanned Aerial Systems. We are proud to have been able to reach this result only 2 years after the launch of the programme, and we look forward to completing this ambitious project that brings together the efforts of leading players in the aerospace and defense domain and will allow Piaggio Aero to gain a primary position in the international surveillance and security industry with the P.1HH HammerHead enter into service in 2015.”

“This has been an incredible year for Selex ES unmanned ISTAR capability. Our deep knowledge of UAS and capacity to deliver integrated systems are at the centre of this ambitious project, a real cornerstone in the European and international MALE scenario. Furthermore, our flagship tactical UAS has secured new customers and our ISR sensors range continues to grow. Working with Piaggio Aero on the P.1HHHammerHead is a unique and fruitful experience, that is proving how Selex ES can provide the right level of technology, under a very tight schedule and challenging requirements, even in case of a highly innovative environment,” commented Fabrizio Giulianini, CEO of Selex ES.
The first flight of the P.1HH DEMO technology demonstrator marks the beginning of the next phase of the development of the P.1HH HammerHead UAS programme in preparation for operational readiness to be achieved by the end of 2014.

The P.1HH DEMO first flight test was mainly intended to validate the Remote Vehicle Control & Management System (VCMS and Ground Control Station) that has been fully integrated over the past months:
On 14th February 2013, the P.1HH DEMO successfully completed ground tests and performed low speed runway taxi, for the first time.

On 8th August 2013 silently and without any formal announcement, the P.1HH DEMO flight test bed made its first lift-off, performing a short level flight and then landing smoothly on the remaining runway, while being remotely piloted.
The Piaggio Aero P.1HH HammerHead is a multipurpose state-of-the-art Unmanned Aerial System designed to meet the need for a high-tech solution for intelligence, surveillance and reconnaissance missions (ISR). The P.1HH remotely piloted aircraft features automatic take-off and landing capabilities, making it able to fly up to 45,000 feet, with an outstanding endurance of 16 flight hours. The UAS systems will be fully compliant with the STANAG USAR 4671 standards that enable the UAV to fly in both restricted and unrestricted flight areas.

The vehicle management and control system, air data terminal and the ground control segment for the P.1HH HammerHead have all been developed and supplied by Selex ES, which is cooperating with Piaggio Aero to ensure highly effective integration. The P.1HH HammerHead Mission Management System is based on the Selex ES’ skyISTAR innovative solutions, which is ideally designed for patrolling and ISR missions, and responding to diverse threats that range from terrorist attacks to illegal immigration, protection of Exclusive Economic Zones, infrastructures and critical sites. Sensor fusion, data management and exploitation features of skyISTAR enable highly effective border control, wide area surveillance, targeted surveillance, environmental and disaster control missions.

Selex ES provides an outstanding contribution thanks to its capabilities, products and experience in developing and manufacturing UAS surveillance systems, and contributing to its avionics/ mission system and its sensor suite, featuring SeaSpray 7300E Radar, Comms and customized Data Link solutions.

The aerodynamic configuration is based on the development of new wings providing a 15.6 m wing span with the subsequent modification of the previous P.180 aerodynamic design but maintaining Piaggio Aero’s patented 3 lifting surface configuration. The P.1HH HammerHead aircraft features a removable external section wing in order to guarantee easy ground transportation and provide operational flexibility in any environment. This modified aerodynamic configuration underwent extensive low speed/high speed wind tunnel testing to validate both its design and performance.

The characteristics of the P.1HH HammerHead UAS make it uniquely suited for a wide range of surveillance intelligence, reconnaissance and security missions and it will be developed and brought to market by Piaggio Aero with a variety of operational capabilities individually tailored to specific customer requirements.