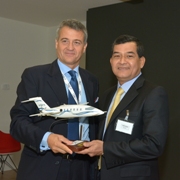 The Royal Thai Air Force (RTAF) and Piaggio Aero Industries (Piaggio Aero) are pleased to announce that Piaggio Aero has been selected as the winner bidder by the RTAF Special Procurement Committee to provide a photo reconnaissance aircraft.

The contract has been signed today at Piaggio Aero ’ s headquarters by the Assistant Commander in Chief of the RTAF, Air Chief Marshal Sutthiphan Kritsanakhup and the CEO of Piaggio Aero, Carlo Logli, in the presence of General Carlo Magrassi, National Security Advisor to the Italian Prime Minister, and Aerial Squadron Marshall General Enzo Vecciarelli from the Italian Air Force.

The selected aerial reconnaissance platform will be based on the P.180 Avanti II aircraft, customized for territorial multifunctional surveillance, featuring customized photography systems for which the Avanti aircraft is ideally outfitted.
The Piaggio Aero P.180 Avanti is a twin engine, three lifting surfaces, special missions aircraft configured for photo reconnaissance.

The single pilot certified Avanti II has a rage of 1,450 Nm, four hour endurance, a maximum speed of 402kts and is able to reach an altitude of 41,000 ft ; these performances can be compared to those of a turbojet aircraft, maintaining 40% lower fuel consumption than any same size jet.

The Avanti features the widest cabin of its segment, which combined with the operational flexibility of the aircraft and the multiplicity of the equipment that can be installed, is the most cost effective solution for special mission configurations.
Carlo Logli, CEO of Piaggio Aero said, “  this contract with the Royal Thailand Air Force demonstrates the competitiveness of the Avanti aircraft in its special mission configurations.

Our aircraft is perfectly suited for the aerial photogrammetric missions required by the RTAF who has selected the Avanti after an intensive evaluation process. I would like to thank the RTAF for their confidence and the Italian Air Force for their support in promoting a highly technological Italian platform in the international market  ”.