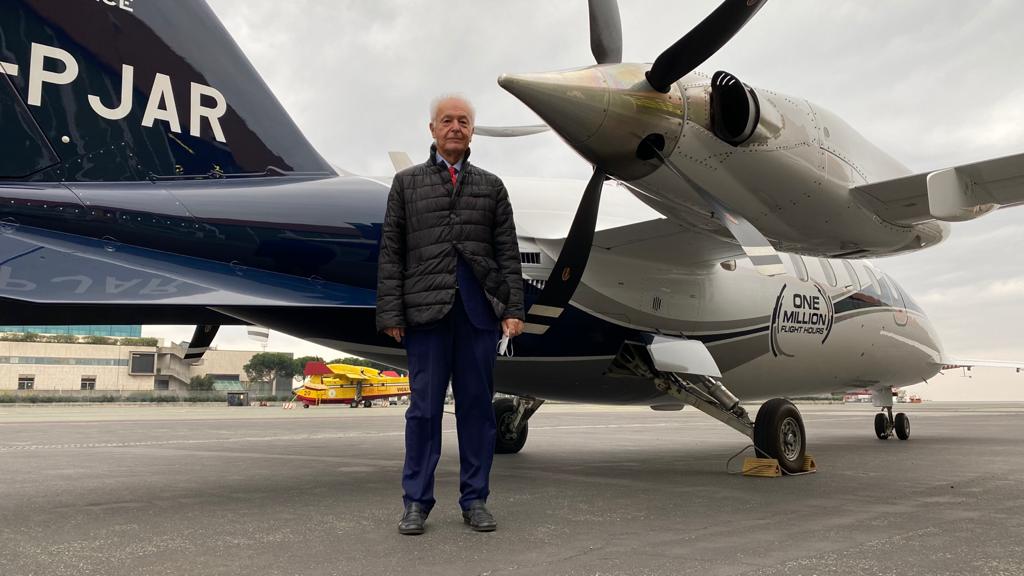 One million flight hours, corresponding to more than 114 years non-stop, if flown by a single airplane. Such is the target that the fleet of the P.180 Avanti aircraft – the leading product of Piaggio Aerospace - has totalled from the time the first unit took off from the Genoa Airport, in the fall of 1986.

Carrying the flag of this historic event has been the prototype registered as I-PJAR, today still active in experimental activity and referred to also as serial number MSN 1002. The airplane, featuring a new livery expressly designed to celebrate this event, has been recorded in a video, while flying over the stunning Ligurian coast, filmed from a piston-powered P.166, recently fully restored.

“Reaching one million flight hours is a milestone that, in the history of the company, carries a symbolic value”, commented Vincenzo Nicastro, the Extraordinary Commissioner of Piaggio Aerospace.  “Exactly two years ago, in December 2018, when I was appointed, the company seemed to be close to collapsing. Despite a very negative economic scenario, we have instead succeeded in bringing Piaggio Aerospace back to being fully operational, saving thousands of jobs and a more than 100-year-old brand. We now look forward to find soon a new owner”, Nicastro concluded, “who, benefiting from a rich order portfolio, will be capable of redesigning the future of the company”.

The P.180 Avanti, which in its third variant assumed the name of Avanti EVO, was designed in the early eighties by a team of engineers led by the aviation designer Alessandro Mazzoni.  The target was ambitious, seemingly almost unattainable: to create a twin turboprop – normally slower than the jets – faster than a jet of similar dimensions, maintaining lower operating cost.

The result went beyond expectations. The aerodynamic solution with three lifting surfaces, still unsurpassed today worldwide, contributed to make it the fastest turboprop in the world, but with operating cost 40% lower those of jets of comparable dimensions. At the same time, the pusher propellers and the fuselage design brought to the history of aviation an airplane with an unmatched large, quiet and comfortable cabin. This optimization of the performances also reflects in the aesthetic of the product, which is considered one of the coolest aircraft in the world.

Piaggio Aerospace has produced in total 246 P.180’s, of which 213 are presently in service in the five continents:  95 are operating in the Americas, 96 in Europe, 18 in the Asia-Pacific and 4 in Africa and the Middle East.  The P.180 with most years of service is known as serial number MSN1004, still flying today in the United States, while the one with most flight hours is MSN1007 (operating in Canada), with more than 11,000 flight hours.

Orders for additional 13 airplanes are at this time under various phases of completion.  Among the first ones to be delivered is the Avanti EVO ordered by a major Asian customer, whose contract has been just recently executed:  it is one of the most prominent private operators of the area, which will utilize the Avanti EVO for people transport, as well as patrolling and air ambulance missions.

Last week, in the meantime, the production team has reached an important milestone in the manufacturing of the first airplane assigned to the Italian Air Force.  Such milestone is known in the aviation world as “marry-up”, meaning that the three main structural components of the airplane (fuselage, wings and tail) have been completed and assembled.  The airplane is now ready for the installation of the on board systems and flight controls.